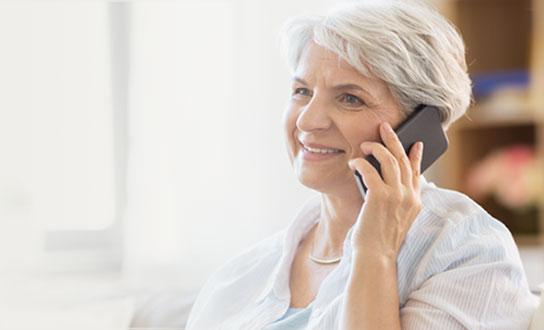 What are the best phone plans for seniors?

Let’s consider the same sort of question, only from a different angle: What is the best ice cream?

In other words, one size doesn’t fit all.

Cost isn’t the only consideration

Nobody likes spending more than they need to, and budget management begins with making sure we aren’t paying for things we don’t need. Cutting unnecessary costs from the mobile phone bill is an obvious area of opportunity. But slashing the budget to the bone in this area should be a careful consideration, not just a ruthless squint at the bottom line.

Cell phone plans for seniors work the same way as phone plans for everyone else. Nobody has identical preferences, usage patterns, or needs. What one person loves about mobile phones, another loathes. An unlimited data feature that’s indispensable for Facebook-and-Pinterest-addicted Martha may go unused by Manny. Bernard might text with multiple grandchildren all week long, while his neighbor Barbara doesn’t text at all.

If they can do all that while empowering the person holding the phone and eliminating contracts and cancellation fees? Even better.

Minutes, text, data: Need vs. nice to have

Whether it’s an easy-to-use flip phone with big buttons and a bright display or a sleek, streamlined smartphone, the cell phone is more than just a phone these days; it’s a life management tool.

But industry jargon can get in the way of understanding what bells and whistles are truly necessary to make these devices work the way they were designed to work to deliver everything they’re capable of doing for us. 4G! LTE! Mobile hotspots! Gigabytes! Shared data! Streaming music! Family sharing! Rewards! International calling! Cloud storage!

Talk, text, and data form the backbone of most phone plans.

Talk: Even though the last thing most of us use our “phones” for these days seems to be pushing buttons and making phone calls, the first component of every phone plan (contract, flexible, or pay-as-you-go) is a set number of talk minutes. Are you a big talker or a person of few words? The answer will help to determine the starting point for choosing a plan that’s right.

People who aren’t big conversationalists may not need a plan with a huge number of included minutes (let alone unlimited talk). It may not make sense to pay a high monthly premium for a plan that allows you to use thousands of minutes if you only call one or two people to check in from time to time.

If you don’t talk much, a flexible, prepaid, or pay-as-you-go plan may cost less on a per-month basis than a standard plan with a generous number of monthly minutes.

Texts: The world seems to be divided between texters and non-texters, and mobile carriers have generally structured their pricing to acknowledge this divide. Early in the cell phone era, texting was difficult. Mobile phones only had standard numeric keypads, plus pound (#) and star (*) keys, so early text adopters had to jump through hoops just to send a few lines to each other. As a result, texting didn’t really take off until mobile phone hardware made it easy to text with full keyboards. Today, of course, smartphones, intelligent interfaces that make it difficult to hit the wrong letters, autocorrect, and even voice-to-text technology all work together to make texting quick, simple, and easy. And the statistics tell the story. Americans trade twice as many texts as they do phone calls. Younger generations are especially comfortable with texting, so even if you aren’t personally a prolific texter, a plan that include at least a few texts per month will let you keep up with the grandkids and not worry about being nickeled-and-dimed on the monthly bill. Plus, texts are handy ways to receive alerts from the pharmacy when a prescription is ready to be picked up, or appointment reminders.

Data: But wait! There’s more! If the phone’s primary user is addicted to shiny apps that chew through data (GPS, Facebook, Instagram, Twitter, YouTube, Netflix) and isn’t always near a reliable WiFi network, then a plan that comes with a generous data allowance is going to be mandatory. That’s because generous or unlimited data usage tends to come bundled with high or unlimited text and talk times—and going over your allotted data can add many unexpected dollars per month to mobile phone bills.

All those photos we upload to Facebook of the grandkids, pets, vacations, sunsets, the adorable little umbrellas in hand-crafted mocktails at the new beachside hot spot? All of that data transfer takes resources, and our carriers pass the cost along, charging us per gigabyte (GB) of data per month.

How much is a gigabyte? A lot. The experts who do the calculations tell us a GB = 51 hours on Facebook, or seventeen hours on Google Maps, or an episode of your favorite show on Netflix.

So, choosing a phone plan for seniors for the amount of data usage allowed per month can be more strategic than choosing a plan for minutes.

Also, keep in mind that data charges can be minimized by using data over WiFi (in your home or away, while connected to a guest or sponsored WiFi network). WiFi data never counts against your cellular phone’s plan.

With hundreds of configurations of available senior phone plans, the prospect of shopping and comparing features, benefits, costs, and caveats can be overwhelming. Cutting through the clutter is a matter of taking the time to look at what the marketplace has to offer—and anticipating needs.

For the most independent, free-spirited souls, it’s possible to purchase a cellular phone and pay as you go, without plans. Prepaid phones (also known as “burner phones” on television dramas) are more popular than many people realize. And while we wouldn’t naturally be inclined to think of seniors as the types to fly without a net, a surprising number of consumers over the age of 55 choose phones without a monthly contract, opting to purchase their voice, text, and data on a per-month basis with the option to switch to another carrier, without penalty.

Freedom of choice is powerful. Tom’s Guide, a respected voice in consumer advocacy, rounds up many mobile virtual network operators (MVNOs)--including several that offer senior discounts—offering a full and honest evaluation of the full spectrum of options.

While nothing changes like the rate of change, some major national carriers do offer structured discounts and multi-line deals for consumers over the age of 55.

But there’s always fine print; if you live alone or have nobody else with whom to “share” the expense of a second line, a discounted two-line plan really isn’t much of a discount when all is said and done. And some discounted plans are offered in only one or two states or throttle data speed.

And for the sandwich generation (busy parents of young children who frequently are also the most important care coordinators and caregivers in the lives of aging Americans), the ability to stay in 24/7 contact using voice, texts, video calls, tracking and fall detection apps creates a priceless layer of peace-of-mind.

One of the more cost-effective ways to get around limits on minutes, data, and texts and to spread those benefits around to more than one person’s phone is to keep it all in the family. And some carriers actually sweeten the deal by covering more than just the cost of your phone plan; they’ll pay for your Netflix subscription, too.

Each of the major cell carriers offers a version of a family plan, and once again, Tom’s Guide is ready to break down the details, including up-to-the-minute costs.

With the option for as few as two and as many as four people to share one account and all of its (unlimited) texts, calling, and data, family plans are an easy, budget-friendly way to help family caregivers keep cell phone plans for seniors centralized and organized.

A la carte cellular service is picking up steam among adventurous consumers, and not every senior is a late adopter. For those people, flexible plan providers allow consumers themselves to choose, adapt, and dictate their terms every month—not the provider.

Don’t plan to use thousands of minutes or gigabytes of data? Then build your own plan, on your own terms.

You won’t get all the features, benefits, health and safety extras you’ll get with a plan specifically designed with seniors in mind, but you also won’t get two-year, unbreakable, long-term contract you’d get from a traditional carrier.

Pay-as-you-go phones provide the standard services of regular cell phones with no long-term contracts or overage charges for minutes that go over your monthly plan. Depending on the phone's features, and until you run out of minutes, you can still make calls and send texts to friends and family.

Guide to Caring for
Aging Parents

How to Choose a
Phone for Seniors

What is Aging
in Place?