How to choose cell phones for seniors 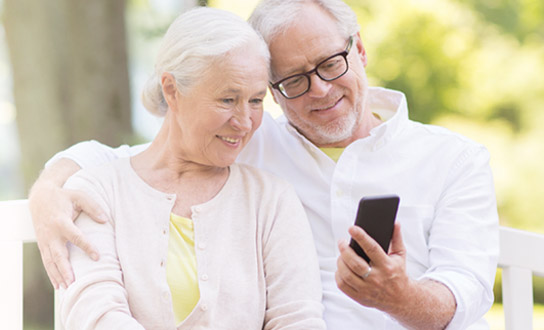 In 2017, the United States Centers for Disease Control revealed Americans have passed a tipping point. By May of that year, more households (50%+) had abandoned landlines in favor of cell phones. As with most trends, AARP notes that older Americans have been slower to cut the cord, but the children of the 1950s and ‘60s are hopping on the no-landline train, trailing the general population by just a few percentage points (47% of those age 45 to 64 are already landline-free).

...more households (50%+) had abandoned landlines in favor of cell phones.

If the time has come to help Mom and Dad save a few hundred dollars a year by getting rid of their landline (as well as helping them eliminate a few dozen monthly telemarketing calls), you may be wondering: How can I help evaluate all the options and choose the right phone for seniors?

The best process for selecting the best cell phone for seniors is simply a modified version of the same process any cell phone user goes through when it’s time to upgrade (or just replace a phone past its prime).

What do you want a cell phone to do?

What are the types of phones for seniors?

There are two types of phones specifically engineered for the needs of older users.

If a senior is already comfortable with tech and wants a phone that hasn’t necessarily been optimized for seniors, the best reviewed options range from basic pay-as-you-go phones to fully loaded smartphones from major manufacturers which can be fine choices for older users if they have nearby friends and family who are willing to help with setup, app installation, and troubleshooting.

Do you want to upgrade or simplify your phone?

Seniors need different phones at different times in their lives for different reasons. Dad may have loved his tiny smartphone screen in 2014, but his finger tremors today can make hitting just the right spot on the screen more difficult. For him, simplifying from a smartphone to a flip phone with big, easy-to-press buttons could be the perfect solution.

On the other end of the spectrum, even those stalwarts who said they’d never give up their flip phones may finally be considering making that leap now that their friends are easily texting and SnapChatting with friends and grandkids on enormous, bright HD screens. Throw in large icons, loud speakers, and other cool features like voice typing, and even hardcore holdouts might look twice at easy-to-use smartphones. Smart can also be simple.

Can I take pictures with my new phone?

It’s nearly impossible to find a phone these days that doesn’t contain a camera; other than disposable “burner” phones that are designed to be discarded after their built-in minutes have been used, nearly all phones have photography capabilities, making it easy to share memories with family and friends.

Are there ease-of-use and/or sensory issues to consider when selecting phones for seniors?

Other accessibility features to look for and weigh as you evaluate phones for seniors:

How difficult is it to get help with the phone if I need it?

Levels of service, hours, and languages of technical support available to users from manufacturers and carriers vary greatly by cell phone carrier and manufacturer, and surprisingly, it’s not always a matter of “you get what you pay for” in the world of phones for seniors.

...major cellular carriers have standalone retail stores that offer at least a first level of user support for phones.

Most major cellular carriers have standalone retail stores that offer at least a first level of user support for phones that were sold at their own storefronts. Likewise, manufacturers may offer phone support for their products.

One of the benefits of selecting a phone designed specifically for older users is 24/7 technical support from U.S.-based representatives for problems, technical questions, and issues that may arise with phone setup, navigation, use, and troubleshooting. Some can even help with

infrequent tasks like adding contacts to your phone, adding appointments to your calendar, or looking up addresses and phone numbers.

Finally, if older users are happy to learn at their own pace, many manufacturers and carriers feature informative how-to brochures, user documentation and even instructional videos on their websites and YouTube to help seniors get the most out of their new phones.

Can I get signal where I want and need it?

The earliest cell phones (and carriers) often created coverage exasperation, stranding people with one bar of signal at home, at church, or at the store. But we’ve come a long way as national cellular networks have expanded.

The best phone is the phone that receives a strong signal where you will use it most—and that generally means at home.

Any phone with service provided by a major national carrier is likely to pull in a reliable signal in most places these days, but some “dead zones” still exist; to see if flip or smartphones for seniors will dial out and ring reliably where their intended users live, be sure to check coverage by zip code before you buy.

Can I keep my existing phone number when switching to a phone for seniors?

Can I handle, touch, and listen to phones before I decided to buy one?

Of course. It’s important for many people to be able to get a feel for a phone before you commit to a purchase. Phones for seniors are available in retail locations across the United States; visit a store near you so you can see, feel, and hear them up close and in person to check out their features and see why they’re such popular choices.

How expensive are the phone, text, and data plans?

A cell phone for elderly users can cost anywhere from around $100 to $1,000; the full range is represented in PC Magazine’s list of best phones for seniors, which includes a flip phone priced near the low end of that range.

Just as selecting a phone depends very much on how somebody plans to use it, so does selecting a rate plan. Smartphone plans for full-featured smartphones from national carriers can quickly reach prices that are intimidating; unlimited data, voice, and text plans to pair with a top-of-the-line phone will currently set you back a pretty penny.

However, phone and data plans for cell phones that were specifically designed for seniors tend to be a bit less expensive . Whether you talk a little or talk a lot, need a little data or a lot (so you can send email, browse the Internet, and use social media) there are minutes, text and data plans to fit your budget.

What if I am not satisfied with the phone, the service, or both?

Most cell phone providers have a two-week return policy and will accept a returned phone (plus all accessories) in like-new condition within that period of time (minus certain fees).

Older users may need a bit more time to decide whether they have made the right decision. So, make sure your new phone’s return policy gives you as much time as you need to evaluate whether the phone you’ve chosen is truly the right cell phone for seniors.

What if I want to change carriers in a few months?

In the cell phone world, contracts can be long, and cancellation fees can be high.

But not all companies require contracts. This is a significant consideration when choosing a phone for a senior; the flexibility to cancel or suspend service at any time without paying a cancellation fee is important for everybody’s peace of mind.

Before committing to a contract with any carrier, be sure you understand exactly what you are committing to, for how long, and how much it will cost to end the contract before it is over.

Guide to Caring for
Aging Parents

What is Aging
in Place?