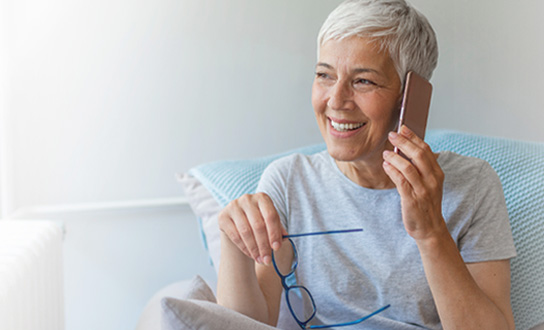 Statistically, if you’re over 65 and joining the swelling ranks of the retiring Baby Boom, it’s likely you’re already one of the 95% of the U.S. population who owns a mobile phone. Originally, your choice was probably driven by style: Did you prefer a simple flip phone or a full-feature smartphone?

Today, an estimated 81% of Americans do everything on their phone.

More than thirty years after the first chunky, expensive mobile models were introduced, all but the most hardened holdouts have adopted mobile communication technology. And a scant dozen years after the introduction of the iPhone, smartphone saturation has skyrocketed as well. Just 7% of us used our phones for everything in 2007. Today, an estimated 81% of Americans do everything on their phone.

And although everyone hates it when we stare at screens during dinner, there’s a lot that smartphones get right.

Making the smart move:
Upgrade to the newest technology

Smartphones seem poised to push flip phones into extinction. These tiny supercomputers are everywhere today for good reasons; they’re the ultimate multitaskers. Fully loaded with features, ready to download apps, and hooked up to the right data plan, a smart mobile phone can do the work of a whole television or movie studio -- all while the aspiring director stays in touch with friends and family on social media and email.

If you’ve held out this long against having a computer in your pocket, it may be time to seriously consider an upgrade from a flip phone to a smartphone.

What are some signs that it would make sense to make the swap -- even if you’ve been one of the longtime holdouts?

Flipping back:
Move to a simpler communication device

During some life transitions -- such as retirement and house downsizing -- it may make sense to reevaluate whether a smartphone is overkill. For one thing, between minutes and data, a smartphone can cost upwards of $85/month. If most of your web-surfing and email is done at home, on wi-fi, a lower-cost alternative like a wi-fi-only tablet could help to bring down monthly costs while still maintaining phone connectivity through a separate, dedicated phone.

So what if a phone user doesn’t plan to shoot an epic, run a business, compose a symphony, manage banking and do online shopping from their handheld device?

Warren Buffett prefers flip phones. And he’s not alone. If you have a smartphone and you’re considering going back to the simplicity of a streamlined device that makes and receives phone calls and handles voicemail tasks, then a “downgrade” may help to eliminate the distractions and temptations of our always-on, 24/7, pings-and-banners, smartphone lifestyle. And you might even be catching the leading edge of a new wave. PBS reports sales of flip phones are up by more than 3% in recent years.

Before and after a switch

How to Choose a
Phone for Seniors