Falls in the elderly: statistics 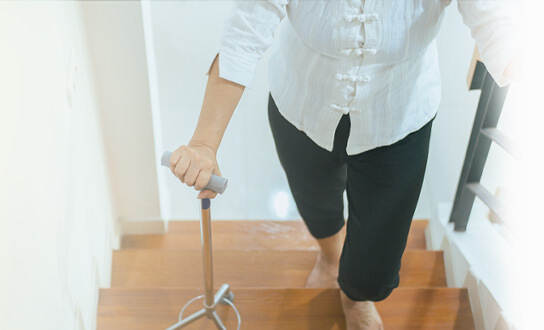 It goes without saying: Every older person has lived a varied and unique life. We all have individual stories, one-of-a-kind histories, circles of friends and family; we are more than a number. So exploring the consequences of falls in the elderly through senior fall statistics—injury rates, morbidity, mortality, subtypes, graphs, and costs—may seem a cold and impersonal way to approach one of the greatest health risks to people 65 and older.

Until a fall affects an older adult close to them, many younger people are unaware of the risks.

But falls in the elderly are so common (and so potentially dangerous), the United States Centers for Disease Control joins forces with the National Council on Aging to designate a day each year as Falls Prevention Awareness Day. And that designation is a direct result of the facts about elderly falls, which are sobering.

Can an elderly person die from a fall?

Until a fall affects an older adult close to them, many younger people are unaware of the special risks and threats that falls pose to the lives, health, and independence of seniors. For those who are unaware, the bottom line is shocking: Falls are the leading cause of fatal injuries for older Americans.

Unlike the bodies of children or younger adults, the aging body does not “bounce back” from falls quickly, completely, or easily. A stumble over broken pavement that may trip a youngster for a second or two could result in a broken bone, major spinal damage, or even head trauma for a person twice that age.

The increased risk to older adults from falls is the result of a constellation of factors. Fragile skin, bones, and tissues tear, break, bruise, and crush more easily. Slower reflexes make it more difficult to catch oneself and recover during or after a misstep. Compromised balance; diminished strength and agility; medications and conditions that cause loss of consciousness—all of these factors can contribute to greater vulnerability when falls occur in older people.

Among older adults who died from falls in 2010, according to the United States Centers for Disease Control (CDC), brain trauma was the cause of death in 41% of cases. But even “less severe” initial injuries such as broken bones may also constitute threats to life when they require potentially complicated medical interventions such as invasive surgery, the potential for infection, and the risks of anaesthesia.

Where do most falls occur in the elderly?

While the CDC gathers extensive data on injuries (morbidity) and deaths (mortality) from falls in older people, it does not track additional information that can fill in the details of how and where most falls occur. Other sources of data complete this picture.

A Cornell physician responsible for training other medical professionals sets the stage for her educational presentations by laying out the most common locations for falls:

Within the home, the National Health Interview Survey of 1997 &1998, offered a wealth of baseline insights. In homes with no stairs, the following rooms and living saw the most falls:

Among falls that produced injuries, the same survey also identified the kinds of falls that were involved (totals are greater than 100 percent because people surveyed could choose more than one option to describe their fall).

As a societal and public health phenomenon, falls are an increasing risk to the health and well-being of the aging population as well as an economic strain on public health resources. The CDC reports the rate of deaths from falls among people older than 65 increased by 31 percent in the decade between 2007 and 2016, despite everything we know about our ability to prevent falls in the elderly.

The absolute risk of falling for any older person, statistically, can be pictured as a narrowing funnel of statistical probability. 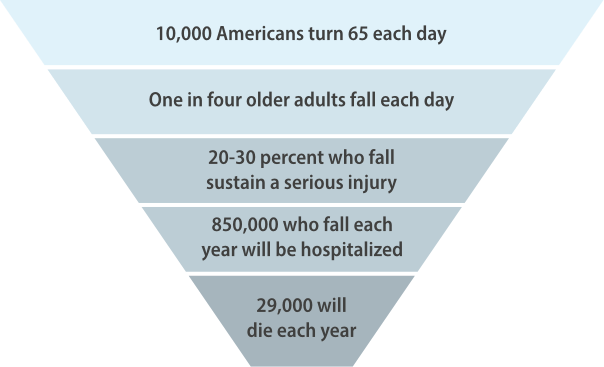 The societal and human cost of falls

The primary concern of most people when it comes to falls is how the risks can be reduced to prevent needless personal and family suffering—and this concern is well founded. After a first fall, many older people become fearful, begin to limit their activities, and thus lose even more physical strength and conditioning, which actually increases the chances they will fall again.

But the costs of preventable falls to the American health care system and families is also real. As of 2015, the costs of treating injuries related to falls in older people was $50 billion; Medicare and Medicaid shouldered three-quarters of these costs, and if the rates at the time of publication were expected to rise to $67.7B by 2020.

One of the most difficult messages to drive home for concerned family members and friends if often the fact that falls are so common, and that they can be so dangerous among those who live independently.

As an absolute numbers game, an older person’s overall vulnerability to injuries from falls requires proactive precautions and vigilance—but also, a commitment to remaining active and engaged. Staying at home, sequestered, with limited activities and quality of life, hoping a fall does not occur, is a “prevention” strategy directly opposed to evidence and the recommendations of elder advocates and health care providers.

It is possible for older adults to seize the reins and work together with their health care team, their loved ones, their communities, and even technology to take proactive steps to avoid fallings—and contributing to these disquieting statistics.

The #1 Threat to
Aging in Place

Shoes for the Elderly
to Prevent Falls